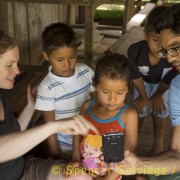 A village waits for the Nenita to arrive.

Four connections and nearly 20 hours of traveling time: the wheels touch down on the runway in Iquitos. I’m on my fifth wind at this point as I get picked up from the airport by Jonathan Shanin and Spencer Selvidge (co-conspirators in this adventure) to head for the hotel. The gear I’d been protecting with my life sits in my lap as we moto-taxi to our residence for the next few days – it’s only temporary though; the real adventure involves a boat full of doctors and the Rio Amazonas.

First impression of Iquitos would have to be: …busy! The city itself is about 500,000 people and a TON of stray animals. On our way to the Belen market, a bustling, colorful, raw bazaar experience, I was lucky enough to witness an ecstatic dog getting a haircut by a man with a sharpened knife. The trip to the market was primarily to pick up essential supplies, and in particular order some things from the Pharmacy for the big trip – but the fact remains: you’re almost guaranteed to see more than you expected in a place like this.

The first day boarding The Nenita – Project Amazonas’ primary hospital ship and our home for the next two weeks or so –  I jumped onto a speedboat with a couple of people for a quick mission to retrieve a kayak. Kind of like a science experiment, we saw where the black water and white water of the Amazon fuse together. Amusing things seem to come in pairs though: on our Skiff was a man who could attract Pink River dolphins by whistling. We found this to be a fairly common skill possessed by Peruvians who spent time on the river. Anyways, our mission was a success and we now had three banana-yellow kayaks onboard the Nenita! Were they recreational? Escape rafts? These are burning questions I won’t answer at this time.

The plan was set – each village we arrived in, we took a moment to assess the population, prepare the medicine, and establish a home base for clinic. The villagers would line up waiting to be seen by the doctors and dentists – and then there’s us: the camera-operators. I tried hard at first to stay out of people’s way but… Spencer and I were in everybody’s business. There’s a poor woman crying during her tooth extraction, and the last thing you’d want to see after all that is a random stranger with a 70-200mm lens and a monopod. She did — and she wasn’t that thrilled.

We slept in bunkbeds for nearly two weeks; and by the second day I made friends with a small spider on the ceiling (I was top bunk). “I’ll make you a deal…” I said. “You can have your web up here – I won’t charge you for rent. Catch the bugs with it so I don’t inhale them at night.” The spider was totally onboard – and pretty fat by the end of those two weeks. On that note, it’s actually really fun waking up in the morning and guessing what bit you the night before.

Hussain Pirani and Michelle Miller demonstrate how to take pictures.

We had a tight schedule: it was something like nine villages in twelve days. Arrive, set up clinic, examine, treat, prescribe, etc. pack up and leave – and repeat. There was an impressive movie moment where the children on the banks saw our boat approaching, screaming to each other in excitement that The Nenita had arrived. It was one of the best welcomes you could ask for as a camera operator – too bad neither of us were rolling at the time.

There were, however, plenty of times where the record light was on, and our cameras immortalized experiences we were lucky to be a part of. Through those two weeks, we saw and felt a lot with these people, and it was reciprocal in many ways. There are still children in the Amazon that have no concept of photographs – teaching them how to take a selfie with a cell phone was absolutely one of the highlights of my trip.  I have to say though, I was particularly intrigued by one village’s demonstration of inter-species friendship: There is a man with ulcers (or some form of gastric distress) in the Amazon – and next to him is a parrot – a macaw that can mimic speech patterns effectively. The man, sometimes too weak to cry out from help in his bed, relies on a loud bird to replicate his sense of urgency and bring others to him.  This is the jungle’s original “Call Nurse” button.

The Macaw watches over her master.

Even just visiting briefly, you learn just how heavily people rely on the Amazon River for most parts of their life. It serves equal parts a Spa, a playground for children, and a Freeway – among other things. Oddly enough, for me, jumping into the River was not nearly as scary as swimming in the Carribbean’s open water. The threats of piranha, caiman, and anacondas (which I thought about at least twice a day) were now distant – and the cold black water was actually inviting given the temperature outside.  I can’t explain why I felt so at ease in the river – accepting that this place would be my home for the next two weeks could have something to do with it. OR… could be because we spent the afternoon with a Peruvian artist, drinking beer like it’s water.

If you just assume from day one that you will catch something – food poisoning, a parasite, whatever – you will be that much freer and happier on your trip. That being said, don’t be reckless… I was not ready to accidentally swallow a bunch of river water splashing about like an idiot. And I chose my foods with a degree of scrutiny, at least in the very beginning. After all, I was there to do a job – and getting sick would’ve made that extremely difficult. And in some cases, ingesting certain things [BUGS, for example] is sometimes unavoidable. In fact, don’t ever say you can’t ingest more bugs – because you can. They get into things… and our juice dispensers would spit out amazingly fresh flavors of pineapple, mango, orange, and papaya – but you’d also find the occasional cluster of fruit flies and other winged nuisances floating in it. More protein, right?

Our return voyage from Pevas was close to 24 hours, during which we managed to capture on film one of the most epic sunsets of the entire trip. There’s a moment at dusk where you realize the sky is going to do something extraordinary – and it was fortunate to have a Skiff handy to jump in and grab shots of the Nenita sailing along the River, the clouds and the sky and the water all lending to the sun’s colorful disappearing act.   It was in that moment too that it hit me: the trip was ending.

Capturing the sunset via time-lapse photography.

When you realize you’re going to the Amazon – as a filmmaker your initial thought is “I’m going to make Planet Earth!!!” There’s a likelihood of being driven by feeding your lens material – whether it’s the landscape or animals or whatever – you’re effectively hunting for those particular shots that will make your project worthy of a South American voyage. Obviously (in this scenario as with many others) the real treasure of this trip becomes the people.

I won’t forget the conversations over meals with volunteers from all over the world: it’s beautiful even if the topic is dull. It’s special even though the moths are swarming around you. Being able to show the boat’s crewmembers footage from the trip (despite speaking limited Spanish) and seeing them laugh is just… inexplicably rewarding.

And then there are the villagers. To be invited into the homes of these people, and see and meet their families. To be able to leave them in better condition than they were just eight hours ago is remarkable on so many levels. There’s a two-month-old child that absolutely would not have survived without the help of Project Amazonas. I watched him yawn one day in the clinic – just a yawn— and was beyond captivated. Without giving too much away as to the focus of our film, the child played a pivotal role in unifying this documentary.

Moments before they all jumped into the river for a swim (except Spencer).

I watched three children horsing around in the River, climbing onboard a canoe and then immediately capsizing it several times. The camera was rolling that time, mind you, but in that moment it didn’t even matter. The Sennheiser video mic was picking up all their squeals and splashing, and the lighting from the setting sun was perfect – still, the shot itself was secondary in my brain at the time. There’s a reality these people are living that is unlike anything I’ve seen or experienced before. For this eye-opening gift I am grateful in many ways, and in fact, I play a fun game where I trace my life backwards to see what decisions I made that led me here. I stopped myself from doing it in that instance, watching the kids on the canoe. They were there,  present and carefree; why disrupt that with analysis? Bursting that bubble, I too was in the moment completely, and with that came a sweetness I can’t put into words, and truthfully, a joy no camera can properly capture.

Hussain Pirani is a screenwriter and director based in Austin, Texas. See more of his work at www.the-delivery-men.com and if you enjoy tweeting, you can connect with him: @hpirani

Cesar Pena In The Amazon Jungle

Greenville News – The Founding of AidJoy
Scroll to top