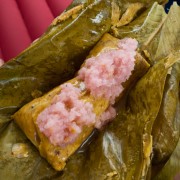 Just thought I’d let you know a bit about what’s going on down here at the moment. We are working on a couple of different stories and multimedia pieces that we will be sharing with you in the not-too-distant future. I would of loved to be able to have a couple of them finished by now but it’s more important that we do as good a job as possible then it is to just crank out “stuff”.

X is Iquitos, our home base, and the star is Pevas

The much loved Peruvian Jungle Tamale.

Last week we headed down the Amazon river to check out some leads for healthcare stories on the Rio Ampiyacu. For mere mortals it’s a 24+ hour trip one-way but we were able to do it in 5 with the help of our friends Cesar and Segundo and our trusty steed, the newly (re)named boat The Peruvian Tamale. (She used to be named the Mai-Kai Express but being the manly men that we are the sole food we packed for our expedition—besides some peanut butter and jelly—consisted of a bag with cuarenta (40) Tamales)

I mean these things are cheap cheap cheap! Three for a dollar to be exact, and you can survive A-OK on one for breakfast, one for lunch, and one for dinner. “What’s a Tamale” you ask? “That sounds disgusting!” you say? Well well well, you have no idea what you’re missing out on. The local Iquitoan Tamale consists of a corn and peanut mush peppered with eggs, some pork, the occasional olive, and some seasoning. They’re Frickin Fabulous!

…and after last week if I ever see another one I’m gonna gag. Seriously.

Annnyyywaaayyy… So! The Tamale Express has a 100 horsepower motor on it, and when you run it full throttle, and head downstream while staying in the center of the current (while swerving all over to avoid the trees and masses of bushes that also like the main current) you can make some pretty good time!

So we get to Pebas by early afternoon. Pebas is a town of about 5000 people that’s situated on a hill overlooking the confluence of the Rio Ampiyacu and the Amazon. It’s a regional capital of sorts and serves as the main hub for over 100 smaller communities and villages who all come here to buy Inca Kola (the national beverage) and *ding ding ding* get medical assistance!

Before we head to the health post though we have to check in with the local Apu (big man). Cesar leads us up a winding path to what could only be described as an Amazonian Castle! The place has a tower and everything! Cesar explains that the monstrosity looming above us belongs to the internationally renowned artist Francisco Grippa—and that he is very cordial with visitors (i.e. he likes to sell them things.) No one seems to be home so Cesar leads us inside one of the dozens of doors into The Gallery. I say “The Gallery” because it’s immediately apparent that The Grippa is a very serious artist. The room we’re now in is the main wing of The Gallery. It’s about 30 feet by 50 feet and has giant canvasses exploding with color… everywhere. The biggest piece is easily 12 feet by 16 feet with the average one being a measly 5′ x 8′ or so. Wild stuff!

A taste of The Grippa’s work

While we’re poking around one of the Big Man’s people emerges and lets us know that The Grippa is in town- so off we go.

Down a path, through a gate, some mud and the main square later we find The Grippa relaxing in his bar and restaurant (they call it a Disco, but I never actually saw anyone dancing in the thing so I’m sticking with “bar and restaurant”) working on what does not appear to my carefully trained eye to be his first beer of the afternoon.

Now now now, a bit about The Grippa. And I’m struggling here because I’m not sure how best to describe this unique creature… Well, for starters, The Grippa is a very large man– and he’s always covered with an impressive display of paints, kind of like one of the Jungle Animals he loves so much to capture on canvas. The Grippa will always tell you what he thinks. The Grippa has a larger personality than 99.99% of the people you have—or will ever—meet. The Grippa is crazy. The Grippa Rocks!

[Click the “learn more” button to see the rest of the photos!]

Catching some Z’s aboard the Tamale Express

A closer look at where we’re at.

A view of The Grippa’s Casa de Arte rising above Pevas and the jungle.

Cesar leading the way through The Grippa’s preserve

Interviewing Francisco Grippa at his bar and restaurant

Francisco Grippa on one of his many porches

A small portion of The Gallery

Chasing the Dream in the Peruvian Amazon
Scroll to top