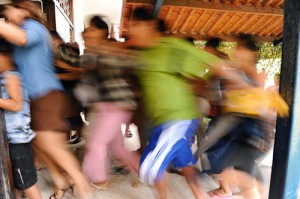 Early morning scene at the Hospital Regional in Iquitos, Peru.

My breathing and heart rate accelerate as the guard puts his key in the padlock holding the doors shut.  The lock opens, the chain drops, the doors swing wide and the stampede begins.  The crowd at the front of the line surges forward as though it were a single animal.  Behind them, a thousand anxious footsteps, more people ­­­­– pushing, yelling, whistling.

No, I’m not at a Black Friday sale at Macy’s.  I’m at a hospital in the Peruvian Amazon.  The people here aren’t fighting for a designer handbag or the latest electronic gadget, they’re just part of the daily struggle for healthcare in Iquitos, Peru.

Iquitos is the capital of Peru’s Loreto region, an area which consists of 143,000 square miles of Amazon rainforest, roughly equivalent to the size of Georgia, South Carolina, and North Carolina combined.  Health care is a major concern as only three hundred health centers serve over three thousand remote communities.  These health centers are inadequately supplied and almost completely incapable of tending to anything other than basic health needs.  No roads wind through the rainforest; dugout canoes are the primary form of transportation.  To receive medical attention a person in the Peruvian Amazon might travel by canoe for two weeks or more to reach a hospital.

I am a photographer working with the non-governmental organization AidJoy. AidJoy and its partner non-profit, Project Amazonas, are dedicated to resolving health care issues in the Peruvian Amazon through the construction and operation of hospital boats.   With me is AidJoy’s executive director, Jonathan Shanin, and our interpreter, Cesar Pena.  This morning we dragged ourselves out of bed at 3:00 a.m. to come document the daily scene at Iquitos’ Hospital Regional.

4:15 am.  It’s still dark when we arrive at the hospital.  Across an empty lot we see a line of some twenty people waiting under a single streetlamp at a gate that leads into the hospital grounds.  While we’re walking toward them a guard unlocks the gate and the people rush inside only to form another line at a second gate.  We follow them inside.  Jonathan and Cesar start interviewing the people who are waiting for the hospital to open.

“You must arrive very early,” Laire Inacuari Gongora explains.  “On the first day you get a ticket.  Then you must come back the next day for an appointment.” Mrs. Gongora is an expectant mother who arrived at 3:30 with her husband and two children. They arrived at 3:30 yesterday, too, and were hoping to see a doctor today.  It is common for people to be turned away and have to return on a third day.

Sarela Huayamba, who was first in line, offered an explanation for the poor service “Doctors are supposed to see 25 patients a day; however, they sometimes only see five to ten.”  Officially, the first 500 people of the day get to see one of the doctors who start showing up at around eight a.m.

6:00 a.m. The line of twenty has grown into a giant serpentine line of about 150 people.  They are acutely focused on the doors to the hospital.  The twenty or so people at the head of the line are pressed so tightly together that it appears that any one of them would be suspended in place by their neighbors if they lifted their feet off the ground.  Competitive would-be-patients are edging in from the sides, causing the frontrunners to press together more tightly.  One of the women in front is physically smushed against the doors, which shake back and forth from the onslaught of bodies.  Another woman starts yelling “Abierta la puerta!” or “Open the door!” over and over.  It seems that everyone has an opinion about why the door has not yet been opened.  A dog, excited by the rising fervor, circles under foot in the thick of the crowd.  The guard approaches.

6:11 a.m.  When the doors open the people rush into the hospital like water from a fire hose.  The enthusiastic dog darts inside as the rest of the people break rank and sprint for the door.  A boy tries unsuccessfully to squeeze in from the side for a few seconds before being swept inside by the flow of bodies.  Afraid that my tripod-mounted camera may get trampled. I pick it up and hold it above my head.  At the end of the rush, as a few elderly stragglers are helped up the stairs and inside, a little boy pauses in the doorway to stare at me.  I notice that we share the same wide-eyed, open-mouthed expression.

6:12 a.m. My hands shaking, I turn to see Jonathan and Cesar sitting on a curb about a hundred feet away holding their sides, laughing while shaking their heads in disbelief.  It had taken a little over twenty seconds for some 150 people to cram themselves through the doors to the hospital.

Later, while in the jungle, the locals relay countless stories about how rare and precious healthcare is, about the hardship in accessing it, and about the resultant threat to their lives and livelihoods. We meet locals who are suffering from malaria, intestinal parasites, and deadly bacterial infections. We talk to mothers who recount complications during childbirth, some of whom ultimately lost their babies in the bottom of canoes while family members desperately tried to paddle them to a hospital.

As a photographer, I am called upon to witness what many others have not.  I share my experiences in hopes of promoting a greater understanding of our World and the human condition.  Being from the United States, one of the most economically privileged places on the planet, gives me a unique perspective on the situation I witnessed in Peru.  While lacking itself, the U.S. health care system is in stark contrast to the complete lack of health care that exists in the Peruvian Amazon 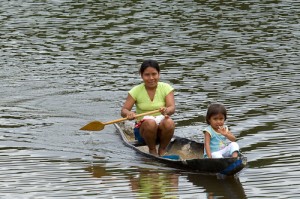 Dugout Canoe in the Peruvian Amazon

The people I have met and befriended on this trip are the caretakers of the Amazon, the most biodiverse region on the planet.  They are responsible for an ecosystem that produces one-fifth of the planet’s oxygen.  I have learned that a cause-effect relationship exists between migration and ecological degradation: when the Peruvians migrate to the cities out of fear for their children’s health, the rainforest is left open to exploitation by multinational timber and oil companies as well as corrupt governments seeking to profit from this ecological treasure.

I am devoted to the people of Peru and the Amazon rainforest, and I believe wholeheartedly in AidJoy and Project Amazonas’ ability to affect the necessary change.  However, I am just one person; one who requires the solidarity of many.  As the Peruvians stampeded through the doors of the hospital, I hope to charge with others through the doors to sustainable health care in the Amazon.

Chasing the Dream in the Peruvian Amazon

Greenville Business Magazine – From SEO to Video
Scroll to top