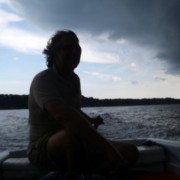 Ode to AidJoy and the Black Blood Dragons

Going with AidJoy is risky business, off the chart, where the geodetic survey drops from the table, over the edge where discoveries are made. Where the olden time mapmakers signified the unknown with a terse warning, “Here There Be Dragons”.

Where AidJoy goes the dragons are sometimes microscopic, the size of sporozoites, those tiny, savage bugs that cook you alive in the slow fires of Malaria. Sometimes the dragons are flame-throwing, petroleum giants feeding on the Earth’s black blood, way up the Amazon River.

The dragons are always way up the river. This time in northern Peru, on the Rio Corrientes, a tributary of the Amazon, where a giant lizard, name of Occidental Petroleum, has sucked the black blood out of the Earth for thirty-five years, and now the river is sick. A lot of people who live along the river are dying, and nobody knows. AidJoy will go and investigate, taking medical personnel up the Corrientes, along with cameras, and journalists and all the equipment that directs the light of the civilized world into the caves where the dragons are.

BRIGHT LIGHT IS THE ONLY THING DRAGONS FEAR!

*click “Learn More” for the rest of the story

AidJoy deals in absolutes. What is known of the Corrientes and the black blood dragons still living there is not very much. Going to find out is risky. The dragons have a lot to protect.

The people who are dying have nothing. Not even publicity that could bring more medicine, even build a hospital ship, given enough candle power. Light of that quality has a price: a dime, a dollar, a bar of gold.

It doesn’t matter how much you give; money you have sweated for and put to such a purpose is a sacrifice that is rewarded by glory. The forces that keep the universe in balance guarantee it.

Reach into your pocket and find a dime, a dollar, a bar of gold and fling it at a dragon.